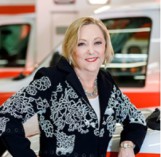 In February 1998, Lauren Rubinson launched an ambulance service with a card table, a telephone and two ambulances parked outside a Chicago storefront. “We called it MedEx,” said Rubinson. “And we didn't even have our own garage.”

After 13 years working for other private ambulance providers, Rubinson believed there was a better way to provide customer service to patients, hospitals, nursing homes, and families, as well as a better culture for employees.

She knew the industry inside and out having held management positions in accounting, billing, sales and marketing at Reliable Ambulance, Tower Ambulance and AMR Ambulance.

“Believing you can do something better, and then giving your heart and soul to prove you’re right is what drives most entrepreneurs,” says Rubinson. “We worked 24/7 to make MedEx a success. The early days were pretty tough on me and our first group of employees, but we did it and I now call them “the good old days.”

Right from the start, Rubinson wanted MedEx to be different from its competitors. Rather than focusing on trucks and equipment, she emphasized culture, employees and relationships. “It’s a high stress business,” said Rubinson, “To be successful, you have to take care of your employees, and in turn they’ll take care of your customers.  And with a shortage of EMS professionals around the country, it's crucial for our company to be recognized as a great place to work.”

Recognition from a trusted partner

In 2013, Rubinson was recognized by Chase Bank for being an entrepreneur that represented the spirit of American business. A longtime Chase client, Rubinson was featured in Chase’s “Mission Main Street” a multi-media advertising campaign that featured success stories from a business owner’s perspective. Nominated by bankers for their unique and compelling stories, Rubinson was among nine Chase clients featured in the campaign out of more than four million middle market businesses across the country.

Appearing on television and radio commercials, as well as business and trade publications, was new to Rubinson. “I don’t want to tell you how many takes it took to create the TV spot,” said Rubinson. “Let’s just say the crew and Chase banker I worked with are very patient people.”

One of the greatest benefits of the Chase campaign was that it exposed the MedEx story directly to consumers and other businesses. A key element of that story is that MedEx leads the ambulance service industry in cutting-edge technology and innovation.  It was the first ambulance service in Chicago – and one of the first in the nation – to integrate computer-aided dispatch software with on-board computers, GPS/navigation and cardiac monitors.

In 2015, MedEx became the nation’s first ambulance service to use Google Glass to visually connect paramedics in the field directly with doctors. With Google Glass, MedEx can transmit live audio and video from the ambulance directly to a physician anywhere in the world.

“I believe in staying ahead of the curve when it comes to equipping our ambulances with the latest innovations,” said Rubinson.

At the 2018 Chicago Auto Show, MedEx displayed a “Concept Ambulance” that included a Lockheed Martin Indago unmanned aircraft system (UAS) – better known as a drone. At the previous year’s Chicago Auto Show, MedEx exhibited a high-tech ambulance created in partnership with the University of Chicago Aeromedical Network, or UCAN, which transports critical patients via ground and helicopter. MedEx worked closely with UCAN staff to integrate aviation technology into their ambulance.

Beyond technology, Lauren has driven innovation for the EMS industry as well as her company. MedEx was the first Illinois EMS provider of MIH (mobile integrated healthcare)—mobile services providing health care outside of the hospital. The goal is to improve patient health while preventing hospital readmissions.

A champion for women in EMS

In a recent Chase Bank publication, Rubinson explained that creating MedEx wasn't something that she simply wanted to do. “Creating MedEx was something I needed to do,” she said. “And being a woman was never a disadvantage: If you can do a better job, it doesn't matter if you're a man or a woman.”

MedEx is a certified Women Business Enterprise (WBE) by the State of Illinois and City of Chicago. Rubinson would like to see more women enter into the EMS profession and to that end, she recently announced a partnership between MedEx and the Industrial Council of Nearwest Chicago (ICNC) that will result in Emergency Medical Technician (EMT) training for up to 100 women annually.

The announcement was made in dramatic fashion via the unveiling of a  pink ambulance at the 2019 Chicago Auto Show. Customized to make EMT work less physically demanding for women or men, the new street-ready ambulance includes two new powerful devices to aid with the transport of patients.

The ICNC is a not-for-profit organization that offers entrepreneurs an innovative community to grow small businesses through incubation, workforce development and neighborhood planning.

ICNC offers an EMT training program, now sponsored by MedEx, for women who want to work as Emergency Medical Technicians or in mid-level healthcare positions. Program applicants include underprivileged or challenged women seeking an opportunity to succeed in life.

The EMT program receives approximately 200 applicants per year: 50 to 65 are selected. MedEx will provide training and education for all of the applicants selected, and for some outside that group, assuming they meet MedEx requirements, and become state licensed EMS professionals.

“We wanted to do something special to call attention to our new partnership with ICNC and thought the pink ambulance would be fun and symbolic,” said Rubinson. “And if the introduction at the Chicago Auto Show is any indication, we thought right.” An attention getter right from the start, the pink ambulance drew crowds at the Auto Show’s annual First Look for Charity event, and was covered by three Chicago television stations.

“We hope this program will inspire women to enter the healthcare profession as EMTs or other important positions such as paramedics, nurses, physicians or physician assistants,” she said. “It’s the right thing to do, and we’re adding talented, well-trained members to our team, and we need that right now.”

It’s an honor to give back

The new annual partnership with ICNC enables MedEx give back to the communities it serves by donating education, time, equipment and supplies.

Rubinson has served as a Board Member on the Swedish Covenant Hospital Foundation Board since its inception in 2007. She has also served on the Hospital’s Women’s Health Initiative Campaign Steering Committee and, along with her husband Glenn, chaired a successful 2013 gala for the Hospital raising more than $800,000 for the Women’s Health Initiative.

Rubinson was the recipient of the Swedish Covenant Hospital’s “Spirit of Compassion” Award in 2015 in honor of the contributions she has made to the hospital and community.  In 2016, Rubinson was recognized by EMS1 Magazine as one of fourteen of the most influential women in EMS throughout the world.

In 2018, Rubinson was named one of Chicago’s Notable Women in Healthcare by Crain’s Custom Media.

In the end, it’s about believing in yourself

Rubinson likes to spread positive messages and believes in the power of positive thinking. “Even in those early days when we stared at the telephone praying for it to ring with a transport request, I told the team that our plan for MedEx will work.” That was twenty years ago, when MedEx conducted three transports a day. Nearly two decades later, MedEx averages more than 200 transports a day.